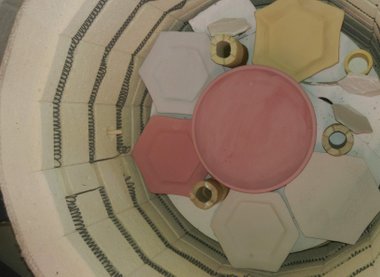 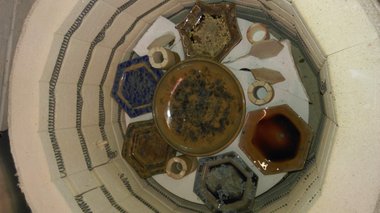 Pots are thrown with a commercial stoneware clay body.  I trim each base to sit on a pre made base and glaze catcher.

Each pot is bisque fired.

Using my previous researches as a start point, I mix up and test my own glazes.  Each base glaze will respond differently to the colouring oxides and varying amounts of zinc.

I use some clay in all my glazes, so they don't run quite as much as most crystalline glazes.  I aim to be able to lift each piece out of the kiln without it needing to be ground off its catcher.

You can see in the top photo, the glaze is painted on to the bisque fired work as a uniform layer.

The firing schedule reaches cone 9 to melt the glaze, then settles back for an extended soak at the lower temperature that the crystals like to grow at.

At about 2 o'clock you can see some of the hexagonal tests I include in nearly every firing.  This research informs future glazes.